Concepted and construted by the team for the sense of hearing:
Sophie Andersson
Ignas Kozlovas
Laura Mello
Lucy Pawlak
coordinated by Antanas Kucinskas and Lina Lapelyte

The sound of stillettos on cobble stones, the roar of a road bike, basket balls boucing, church bells pealing, Lithuanian, Russian and Polish voices, these are a handful of the sounds of the city of Vilnius. Within this multifaceted metropolis we encounter concordance and contradiction; in the shopping malls and down the back alles, between rughless capitalistic privatization and gentle, even hippy-ish communal sensibilities, between catholic rituals and pagan traditions, between scrawls of graffitti and baroque cornices upon a single house. Vilnius is much more than the somewhat contrived notion of an european capital city of culture – I´d sooner have a community with a culture than a cultural community any day!

This patchwork of disagreements and agreements has led us to utilize the framework of Sutartinés as a starting point for our composition. Sutartinés derive their name from the word sutarti roughly translated as to agree or to be in concordance with. In the vocal form mainly only two voices may sing Sutartinés at one time, while one voice sings a semantic (with meaning) refrain the other sings a non-semantic part. The two elements are different and yet they form and agreement. For our non-semantic part we took a wide range of sound gathered from around Vilnius and cut them into short phrases to build a series of rhythms of the city from juxtapositions and samples of its daily hustle and bustle. For our semantic part we recorded conversations with residents of the city. 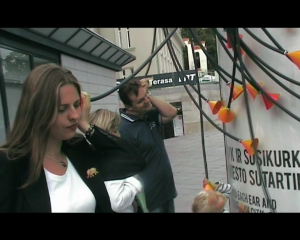