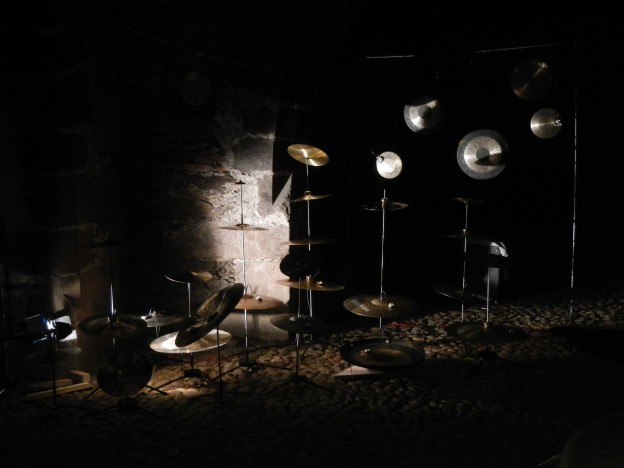 Eferdinger Becken (Becken meaning cymbals) is an installation-instrument by Wolfgang Musil and Laura Mello commissioned by the Festival der Regionen, made out of aprox. 40 cymbals and transducers, hanging up on stands, distributed inside stone walls down in an old castle´s basement. In fact, this sculpture is a multi-channel instrument, each of the transducers pursuing its own signal way, going from the computer to each cymbal, from where it is projected into the room. As each cymbal has its own sound characteristic, it is an open sound-projection-platform that evokes a chaotic Akusmonium and can serve many approaches.

For the Festival der Regionen, we used (amongst others) sounds of the surroundings where the installation was located, the same called geologic region ´Eferdinger Becken´ (meaning here sedimental basin and not cymbals) around the city of Eferding in Upper Austria, establishing a connection between spaces inside and outside the Starhemberg Castle.

We had a pool of pre-recorded sounds, controlled by a MAX/MSP multi-track composer tool (KOMPOSER) programmed by Wolfgang Musil. This tool enables to write compositional lines determining actions in time for each sub-patch of the tool. Thus, the machine will pick up sounds and play them, let´s say, one minute long, using chosen factors (randomized or not) on, for instance, channel numbers, playing a sound each time through a different channel or moving the sound cloud throughout the cymbal sculpture.

(Sounds in the examples: single notes and chords played on accordion, rain drops)