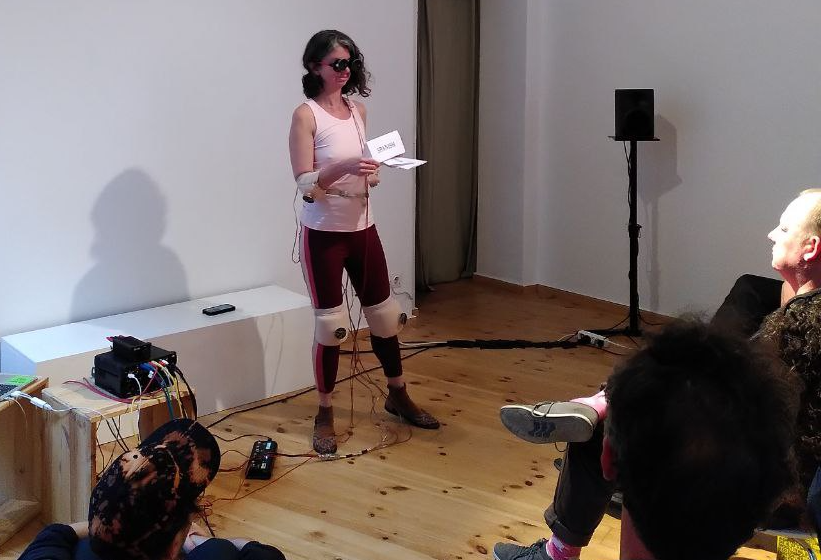 Voices Castles Sounds is a lecture on the sound of the voice.

Hello, I am my voice. I am a person in sound.
This sounding person has been given a name: Laura Mello This means that Laura Mello´s voice has a particular sound, its own timbre, its own range, its own way to articulate.

Voices from the loudspeakers 1
The air flow from the lungs (the energy source) is first gated by the vocal cords, which open and close the glottis to convert the wind into an audible buzz; this buzz is then articulated by the physical configuration of the vocal tract (tongue, lips, palate, etc) to form different speech sounds that are output from the mouth. The vocal tract, which is essentially an air-filled tube, acts as a resonator with a different set of resonant frequencies according to the shape it takes, emphasizing the harmonics of the incoming buzz at irregularly spaced peaks known as “formants”.

Can “A” be a transient?
My voice has a body, well, actually, the body is also part of the voice. This sounding body has a personality. When you saw me walking in, you´ve probably already perceived this personality. Without having listened to any word of mine, you might have guessed unconsciously, how I would speak.

What is perceived? Sequences of rhythmic-melodic patterns, enhanced with complex articulations.

Voices from the loudspeakers 3
The primary determinant of speech melody is the fundamental frequency (F0), Speakers influence F0 via the tension of their vocal folds and via air pressure beneath the folds (subglottal pressure): Greater tension or air pressure leads to faster vibration and higher pitch, and vice versa.

Voices from the loudspeakers 4
Filters on the receiving end, which processed a buzz source (for tone) and a hiss source (for noise).

As you could see, my voice has a tale. Every time I speak, I leave a track, a footprint. This footprint or should we better say a mouthprint can be a noise that has knocked around the walls in the room we are sitting in. And then we get the information about the room and about our relationship to the room. It is a very tiny, almost imperceptible rhythm.

Voices from the loudspeakers 5
“Rhythm” denotes periodicity, in other words, a pattern repeating regularly in time Although all periodic patterns are rhythmic, not all rhythmic patterns are periodic. That is, periodicity is but one type of rhythmic organization. Unfortunately, there is no universally accepted definition of rhythm. Both speech and music are characterized by systematic temporal, accentual, and phrasal patterning. How do these patterns compare? What is their relationship in the mind?

At the same time, the voice is like a river, it has a flow, and the flow is the melody. I speak and you can listen to it as if it were music. If you don´t understand the words, quantos aqui falam português nesta platéia, quem não fala português vai saber que eu estou falando português, mas não vai estar entendendo nada do que eu estou falando. Vai estar ouvindo a minha voz enquanto eu falo com sons sem sentido. Like when you are sitting in the kitchen and the radio is on but actually you are not listening to it, you are just letting the flow of the words hipnotise you. You are actually totally lost in your thoughts, washing the dishes and the radio is monomonoononomono…..WPOL monomonomonomonomonomono…Heavy Clouds…monomonomono…Fora Bolsonaro…

Voices from the loudspeakers 6
Each language has a rhythm that is part of its sonic structure “an organized sequence of pitches that conveys a rich variety of information to a listener.” Speech melody can convey affective, syntactic, pragmatic, and emphatic information.

How do voices sound? How are they perceived? What is its sonic starting point? Does the voice create an atmosphere that sounds like communication, but it´s not? I mean, something that sounds like voice but you can not understand the meaning? This huge human construction, the language, is abstract, but without this tool, how would human interaction look like? So for me, language is the hardest matter in the civilization question. Is is as hard as a castle. If you imagine the world castle, the red bricks of the prussian culture, the minarets, one window is romanic, the other is gothic, on one side you have a football field, on the other side a moat. Imagine the castle from the inside, a big atrium, surrounded by many rooms, a circle of rooms going from the atrium. In each room there is a group of people talking, in each room a different language. Imagine all the rooms would have an open door to the same atrium and you will be standing in the middle of it.

Voices from the loudspeakers 7
How do melody in speech and music compare in terms of structure and cognitive processing? That aspect of speech melody known as intonation, in other words, organized pitch patterns at the postlexical level.

Let´s say you have been trained during this lecture in perceiving the sonic nature of languages. You are standing in the middle of the castle´s atrium, around you are several rooms, in each room a different language is being spoken. You have to concentrate in the rhythmic-melodic pattern, the transient clouds, the F0 clouds, the content is not important now. Just imagine, if this castle were made of sand, and you would blow it up, so that the resulting effect are sand clouds, within each the sand grains are organized in patterns, transient pattern clouds. We are passing now the arabic room…the spanish…the german…the greek…the italian…the romanian…the vietnamese…the usa english…the turkish…the slovakian…the portuguese…the croatian…the slovenian…the brazilian portuguese…