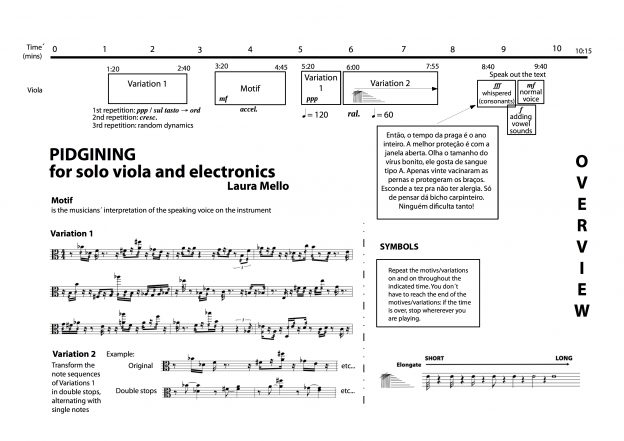 Pidgins are proto-languages which arise as a result of language clashes, mostly a mixture of two or more languages, when the communication partners don´t share the same language but they must have a conversation.
In analogy to this idea, each of Laura Mello´s musical pidgins are studies about the musical aspects of spoken languages, stressing questions as
– How does the human being perceive these hybrids between spoken language and music?
– In the human cognition, how much of music is in the language and vice versa?
Until now, there are two series of musical pidgins, each of them with different compositional approaches, always focussing on the musical aspects of the spoken language.
– Pidg In for Ensembles, for more than one instrument and electronics
– Pidgining for Solo voice or instruments and Electronics

Pidg In for Ensembles

The first impulse for the composition of a musical pidgin came with the invitation to take part of the project „WordUp?!„, an „experimental soundclash between rap and contemporary classical music“, proposed by Ferdinand Breil and Nicolas Wiese.
I wanted to write flexible music, in which the musicians can use their creativity and express themselves. What is more individual than the own way to speak? In the Pidg Ins for Ensemble, I try to contrast the spoken language as perceived by human beings and by machines.

Pidgining for solo instruments and electronics

Pidgining for voice and electronics (2020)

Pidgining for drumset and electronics (2019)