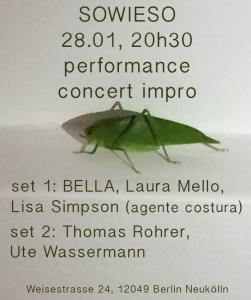 Bella is a ghost entity and acts nameless since early times. Within unrecognizable limits, she plays with the transposition of sonorities among the visual and the performance. Together with ameiacura she created videos, sound and installations. Her solo performances travelled around some spaces in Brazil including Festival Perturbe Curitiba, Marília Theater in Belo Horizonte, Quintavant in Rio de Janeiro, Ibrasotope and estudiofitacrepe in São Paulo. She has collaborated with artists as Maya Dikstein, Thomar Rohrer and Philip Somervell, Sanannda Acacia and J-p Caron. She is member of the female sound group named „Meteoro“, which will interact with the installation „Delivering voices“ by the brazilian artist Tunga at Festival Novas Frequências. Later this year she will be frightening Poschiavo/Switzerland as an artist-in-residence.
http://bellacomsom.tumblr.com

Lisa Simpson is a sewing agent. She has been playing the Singer, a sewing machine, since 2003. In the daytime she tackles unwanted clothing, pins them down and cuts them up, transforming them into new wearable shapes. By nighttime, the Singer joins her fellow musicians and Lisa sews to the beat of the music, improvising on clothing based on rhythm and sound. The prepared sewing machine is amplified to become a musical instrument, and new sculptural garments are created from old clothes. She can be found deep under a pile of commissions, or in an exhibition in progress somewhere around the world. Lisa has performed extensively on an international level, including at The Vancouver Art Gallery, the Month of Performance Art- Berlin, the Bimhuis Amsterdam, Curitiba Fashion Week, among others. In 2014 she was Artist in Residence at Villa Waldberta in Munich, invited by the EU project What’s the Deal.
http://musicalsewing.blogspot.de/

Ute Wassermann is known as a vocal soloist and composer/performer for her extraordinary, many-voiced and extreme vocal sound-language, which she has brought into experimental/contemporary music in diverse ways. She has developed techniques to “mask” the voice using birdcall-whistles, palate whistles or resonant objects, and designs sound-installations. A particular interest is the development of compositions for spaces with unusual acoustic qualities. She studied visual arts (sound installation and performance art) at the Hochschule für Bildende Künste in Hamburg with Henning Christiansen and Allan Kaprow among others, and subsequently visual art, music and singing at the University of California, San Diego (with a DAAD grant). As a vocal soloist in contemporary and experimental music Ute Wassermann has performed in festivals, galleries and clubs throught Europe and also in Australia and Asia. As an improvising musician she performs regularly with musicians of the London scene (for example in John Russell’s Mopomoso and Fête Quaqua events) and in duos with Richard Barrett, Aleks Kolkowski and Birgit Ulher, in the quartet “speak easy” (with Phil Minton, Thomas Lehn and Martin Blume) as well as in larger formations such as the octet fORCH. . As an interpreter of contemporary music she has given premieres of numerous works composed specially for her voice, for example by Richard Barrett, Chaya Czernowin, Henning Christiansen, Hans-Joachim Hespos, Michael Maierhof, Michael Finnissy and Ana Maria Rodriguez, with the ASKO Ensemble, Elision, Munich Chamber Orchestra, KNM Berlin and others. She has taken part in music theatre productions by Matthias Kaul (Ensemble L’art pour l’art), Salvatore Sciarrino, Gerhard Stäbler and others, and performances with dancers, circus artists and visual artists; pedagogical projects and workshops with her choral composition “mimic” for festivals and cultural institutions.
http://femmes-savantes.net/en/lesfemmessavantes/ute-wassermann/