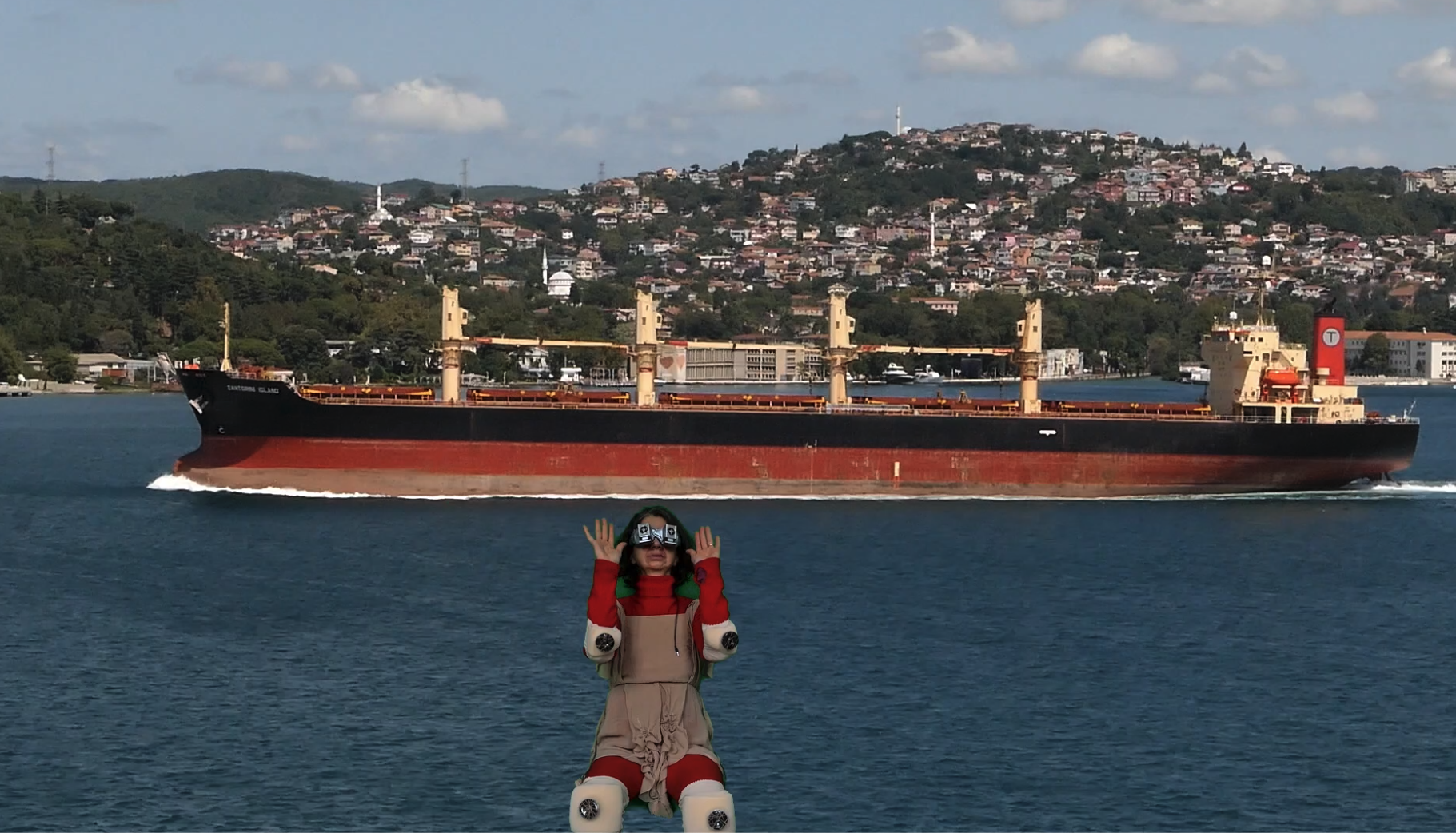 is a performance about communication throughout space and time, from the series Composing for Many Media Including Me.

One day I went to Istanbul. In the beginning I felt like I was far away from any place I´ve ever knew. Then I started to have the feeling that this place connects me a lot, not only to other places, but also to other times, in the past and in the future. The internet was actually keeping me more away from the physical reality than connecting me to it. I had the necessity to develop some new strategy. And then the old became the new.

I decided to concentrate in the vessels passing by my window. Their movement was extremely attractive, I went curious about their flags, their destinations. I downloaded the Marine Traffic App and started to follow them. I would anticipate their arrival in order to preview when they would enter my camera view. I wanted to have the blue void before them.

I started listening to short radio stations. If you realize, they exist since more than a century! And we are still amazed about the internationality provided by the internet. Actually, it provides us velocity, we´ve already had a global communication system, even since the telegraph. Is velocity the price we need to pay in order to include more people in the network?

Feb 12 – 20:00 (Einlass 19:30 – only for 30 people) @ Zeitzone Gallery (Adalbertstr. 79 – 10997 – Berlin) and ONLINE
The series Composing for Many Media Including Me is my ongoing Solo Project since 2008. For the next edition, named „Sound Fisherwoman – Pescadora de Sons“, Agente Costura (who is also in the Festival Line-up) and me are working on a new sonic costume.

This performance edition has been supported by the GEMA – Neustart Kultur Stipendium and the Kulturakademie Tarabya Istanbul.

Please check the FB event site for updated information on tickets and schedule.

Sonic Sound Space (SSS) is a project focused in sonic experiments, sound art and experimental art. In its fourth and special edition, the project brings together 12 experimental artists, from pop to poetry, to give an insight into their current creation.

The project had been organized since 2019 by Laura Leiner (Yellow Castle Label – M.i.p.V). It started on Mai 26.2019, in collaboration with the visual artists and performers Werner Kernebeck and David Braithwaite, at the Neon Kunst Galerie (Berlin-Neukölln), wich is temporarely without musical performances.

The SSS #4 will be an hybrid event, live (with audience, 2G+ or 3G Event) and online/live streaming, broadcasted to Facebook, Youtube and Instagram. And our project was selected by Musikfonds Projektförderung in the last round in 2021 (3. Förderrunde 2021)! Thanks to GEMA /Musikfonds / Neustart Kultur / BKM.